Now I am deep into painting dinosaurs.  Having put in one of the critters, to see the highlit eye shining, staring out at me, to see the skin patterns emerge, to make up reasonable color schemes for animals whose true colors will never be known- pretty dang fun.  So I have painted my way across 120 million years or so- from the late Triassic to the mid-Cretaceous.

Here are a few of the recent additions to the bestiary, with comments. 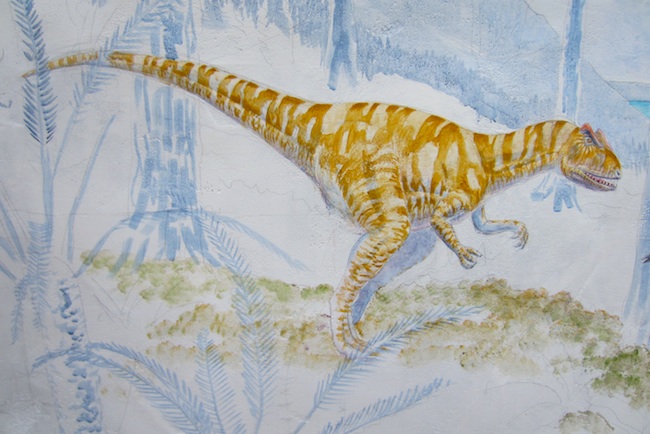 Allosaurus- the star of the show.  Yes, T. rex is more famous but this wolf of the Jurassic is much more nicely proportioned.  Don't know if the light blotches will remain but I like the attitude. 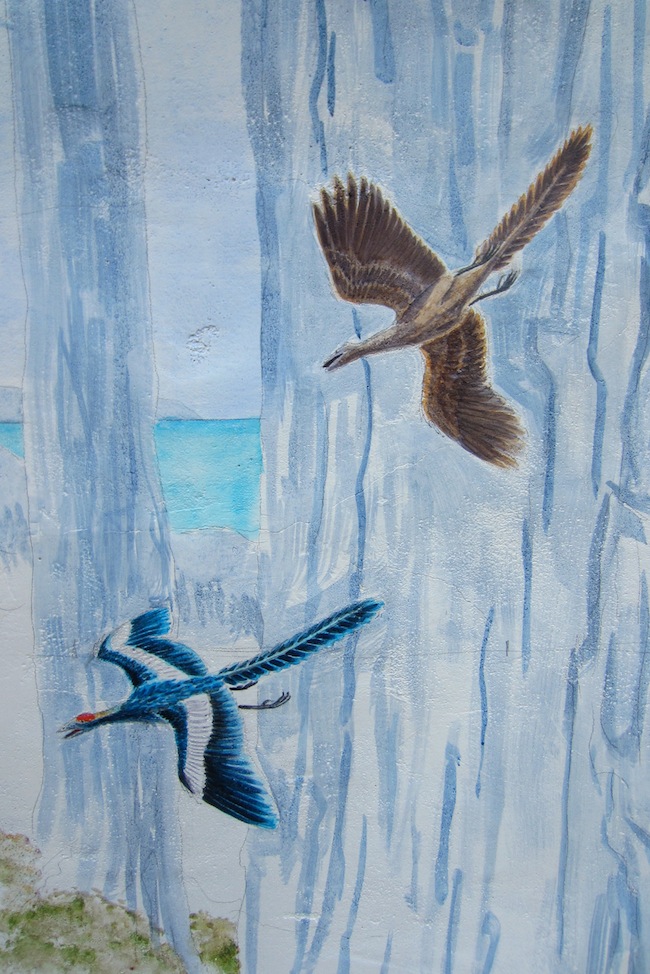 Archaeopteryx- long thought to be one of the earliest birds.  These birds had long tails and teeth.  I decided to make the pair dimorphic- the male more brightly colored.  This is common among living birds so I see no reason why it shouldn't have been so 140 MYA.  Boys gotta show off. 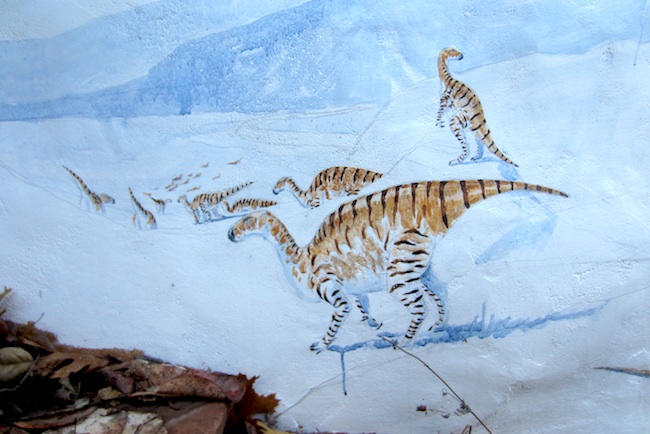 Iguanadon- one of the first dinosaurs discovered.  A herding herbivore.  I particularly like the standing one atop the boulder. 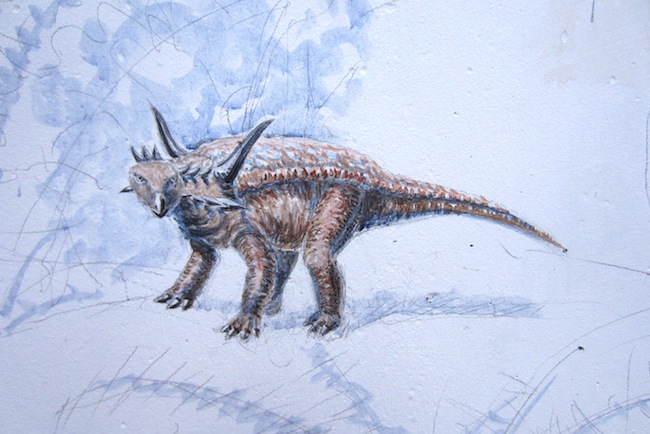 Sauropelta- a several ton horned lizard of the early Cretaceous (100 MYA).  Those long spikes were about 2' long and the back covered with a thick layer of armor. 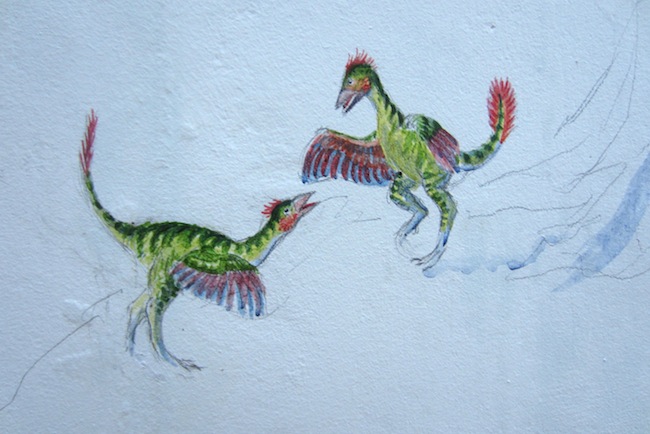 Caudipteryx- not a bird but a feathered dinosaur.  So on this one, which is structurally accurate by the way, I thought of the animals using their feathers for display purposes.  The bright feathers could be folded away when prey was approached- these chicken-sized critters probably ate small reptiles and our tiny mammalian ancestors- then flashed to make a point in social display.  A very small portion of the painting but really fun.  I still have to add hands and feet. 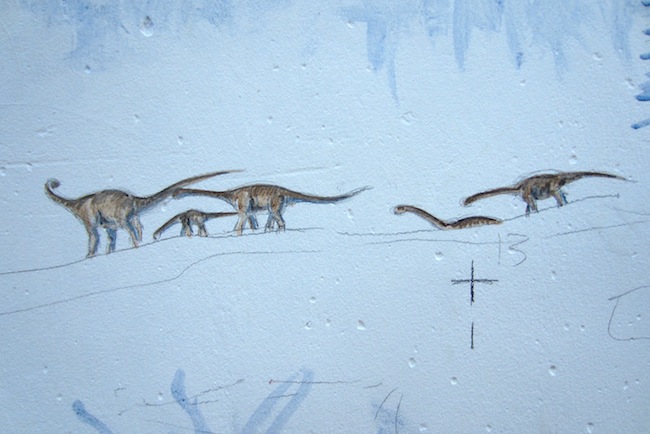 Alamosaurus.  Long after the glory days of the sauropods, the long-necked dinosaurs, had passed a few of them hung on in North America.  I put this small herd in the background, striding over distant hills.  The pencil marks show how small the painting is. 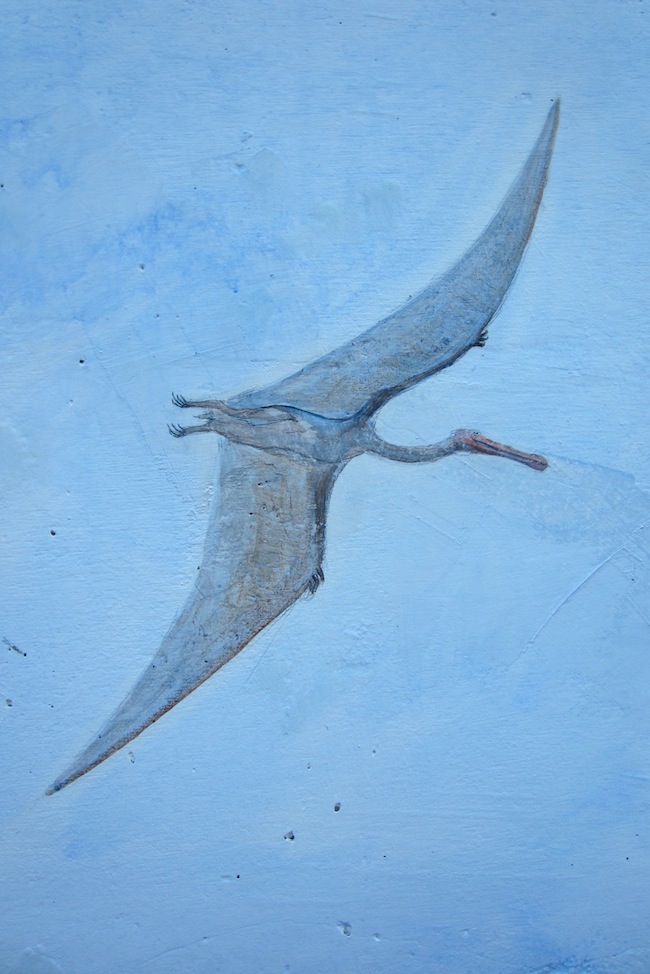 Ornithocheirus- one of the incredible giant flying reptiles of the Mesozoic.  Wingspan was about 30' but it was nowhere near the biggest of the pterosaurs.  They don't make 'em like that anymore. 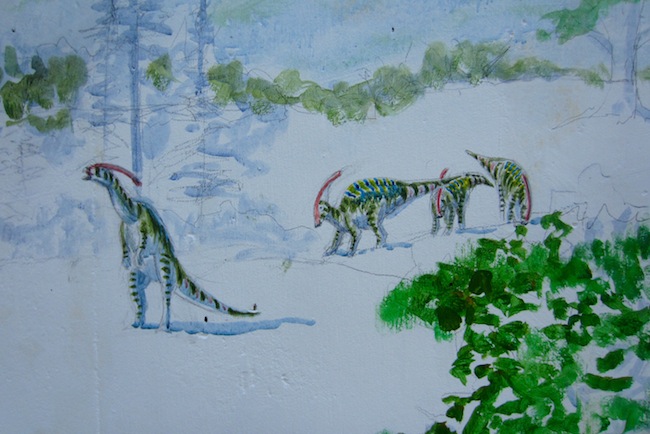 Parasaurolophus- a 33' hadrosaur.  The  6' long crests were probably used as resonating chambers so I showed the foremost one standing and bellowing.  The age of dinosaurs was probably pretty noisy and these guys were blowing mean horns.  I had a lot of fun with the color scheme.

A big rain is coming our way in a couple of days.  I felt the change today when a big wind blew in, scattering oak leaves all around and dropping the temperature by 10 degrees.  Tomorrow will be a maximum effort to get in as much work as possible before the storm.  I will be huddled under a tarp once it hits.  Painting outdoors, even is Lotus-land, has its challenges.