The trick of convincing a viewer that a flat surface has depth is called perspective.  This is a complex set of visual cues that our eyes interpret constantly as we make our way through a three dimensional world.  Texture, color, position (especially overlap and relationship to eye level) all cooperate to let us know where we are.  An artist can use these components in making the flat seem deep.

I have filled in all the major blank spaces on the mural and now my task is to add that depth.  With distance things seem to fade- look at nearby and distant mountains and you will see the effect of atmosphere on the color of objects.  That which is near you will look brighter and darker and more detailed and more intensely colored than that which is far away.

The last two days I have worked in the foreground of the Triassic and Jurassic, adding in some critters, adding intensity to critters already there and painting in a lot of greenery- all this to bring the foreground as far forward as possible while leaving the background where it is.  I am adding visual weight to the elements I want to command attention.  I continue to move fast on the painting but I can tell that I could work on this painting for the next year and not exhaust its potential.

Archaeopteryx now- edges cleaned up and trees filled in behind.

Allosaur and that pair o’ birds with cycads (incomplete) in the foreground.  Much of a day I spent adding intensity  and detail to the greenery in this section.  This was an exceedingly lush period in Earth’s history and I am showing that with vivid greenery.  I will be adding one more layer of ferns in the immediate foreground as well as adding leaves to the cycads. 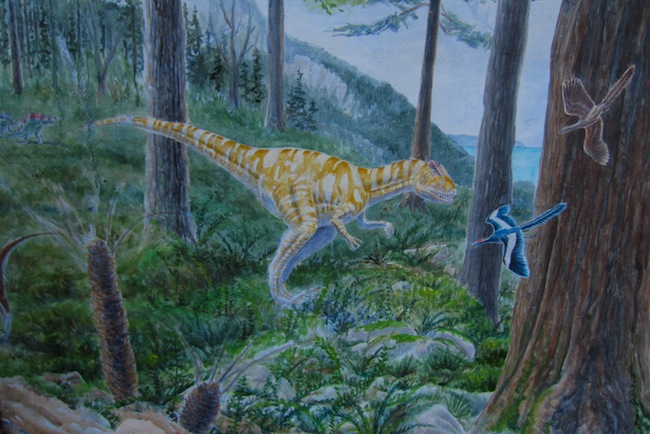 A pair of raptors encounter a strange armored reptile (the turtle is not filled in).  This pair bothered me for a while- they weren't clicking- but after an hour of attention they seem to be working.  They are in the dromaeosaur group- the one that contains Velociraptor- and it is now thought that many of them had feathers of some sort.  Mine have body feathers and a display crest (borrowed from the tiny golden crowned kinglet).  Note the huge sickle shaped claws- these wicked devices folded up to keep them sharp and were deployed in leaping attacks.  (Another set of raptors play a role in the Cretaceous portion of the mural.) 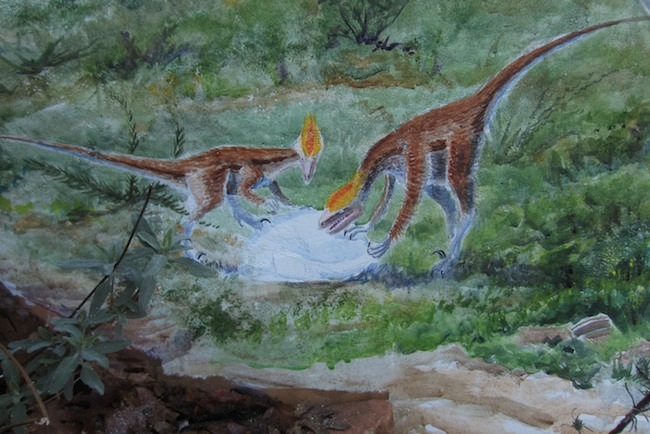 A pair of Stegosaurs in the mid-ground.  I envision this as courtship, with the male flashing his colors, but how these things mated is beyond me.  Still need to add the tail spikes (3’ long in life).  Incredible animals, so utterly weird.  What a planet we live on! 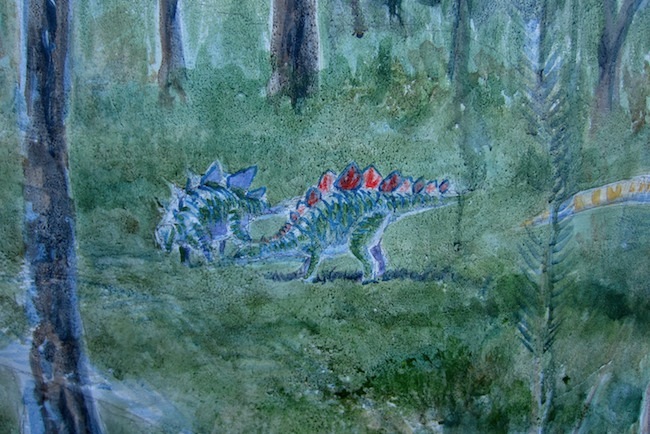 Late Triassic and a Gojirasaurus (named for Godzilla) scares a Protoavis off a boulder.  Protoavis predated the much more famous Archaeopteryx by about 80 million years but its discoverer insists it was a very bird-like reptile or reptile-like bird.  Gojirasaurus will be concealed behind the leaves of a monkey-puzzle tree.  His eye will be gleaming behind the shrubbery.  I painted it in its entirety for the fun of it and now I will conceal it.  I wanted a lurking and threatening presence- something staring malevolently out at the viewer.  Gojirasaurus was “only” 23’ long. 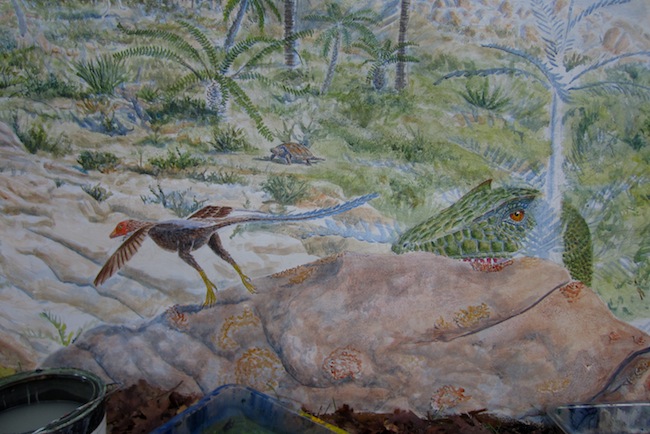 In the background is Proganochelys, the oldest known terrestrial turtle.  It could not retract its head so instead had heavy spikes all along its neck and tail, a tail that carried a club at its end.  The Mesozoic was not for sissies.

Heterodontosaurus (“different toothed lizard”) a three foot long omnivore is perched on a boulder while a Brachiosaurus (“arm lizard”) strolls in the mid-ground.  The latter was about 75’ long and maybe 75 tons.  The ferns behind the Heterodontosaurus will eventually provide perspective clues as will the details all around the little guy.  These will push the big galoot into the distance and, with luck, convince the viewer that one dino is tiny and the other huge.  Note the fading sets of hills in the far background- bluer and fainter as you go. 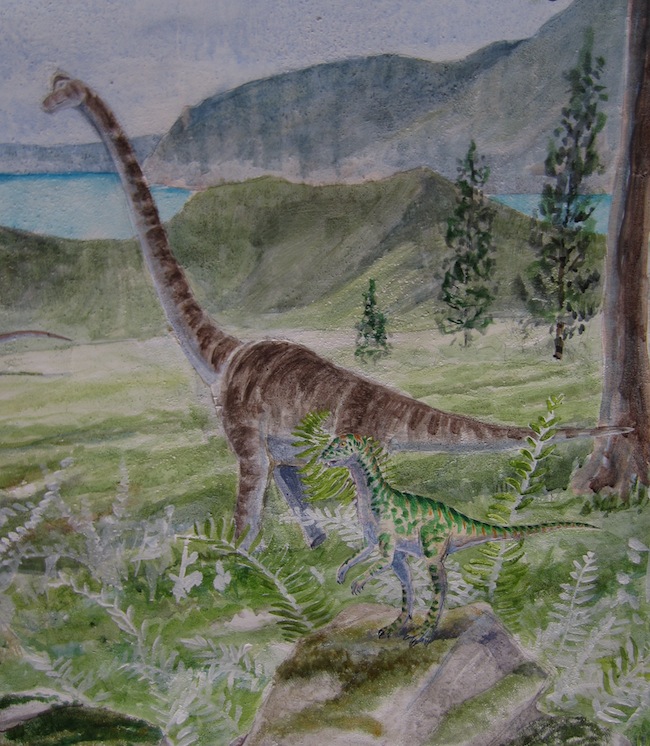 One final dino, another Brachiosaur- the biggest I have painted, so tall his head reaches beyond the wall.  I placed him behind the redwoods for a reason.  I always wondered why conifers were so tall.  Having researched the Jurassic a fair bit I find that many researchers think they grew tall to escape the teeth of dinosaurs.  Few herbivores now dine on conifers- they are too tough and poor in nutrition but with digesting chambers the size of SUVs large dinosaurs were able to process huge amounts of food- to make a living from eating evergreens.  So here is one of the largest land animals standing behind a pair of the largest plants- an herbivore and an herb of equivalent scale. 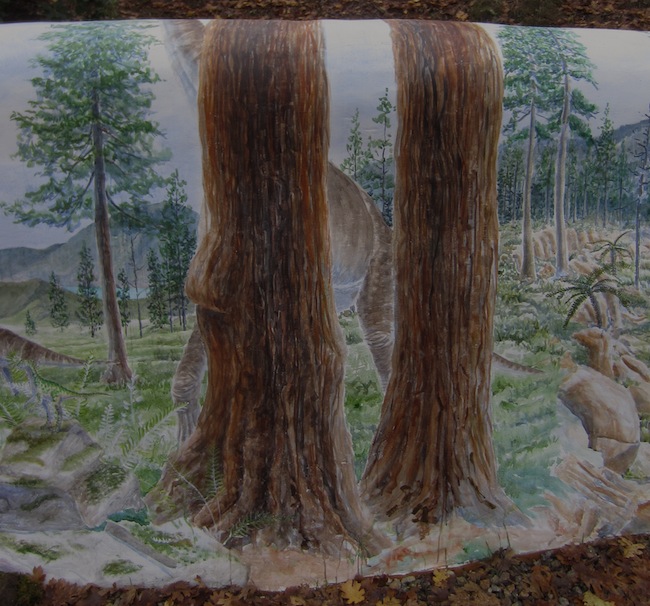 Every morning I travel across the surface of the mural in my mind’s eye and seek out the area that is interfering with the illusion I am working to create.  The whole thing is burned into my brain making my virtual tour easy.  By the time I touch brush to paint to concrete I have a clear set of priorities in mind.  I rarely pause once the day warms enough for me to work.  I step back from the surface only to see the effect of my latest moves.  Sundown brings an unwelcome cessation to my work- cold and dark alone drive me away.  I am obsessed.

But...for two nights last week Steve and I went to concerts in San Luis Obispo- my first time out of the area since I arrived.  Thursday it was Taj Mahal playing to a thousand and Friday Dan Hicks and the current version of the Hot Licks playing to a hundred in a little club (proof below).  Equally brilliant old guys with complete confidence on stage.  Really enjoyed the live music (as opposed to canned) but being re-immersed in Car-ifornia was a shock- so many hunks of metal flying around. 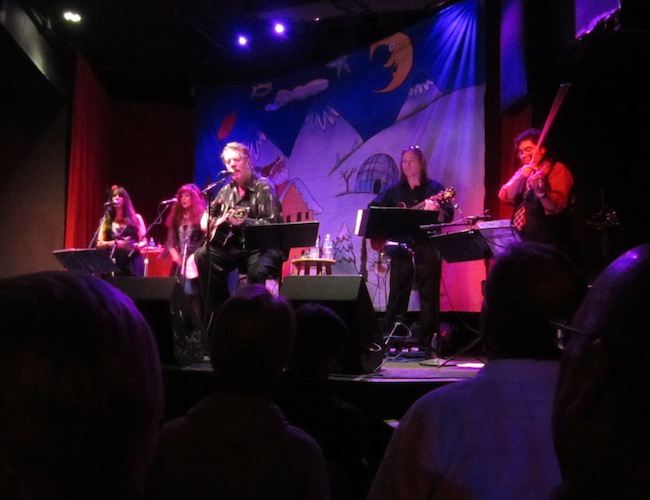 Nine days to go, rain coming on Thursday.  When work is play, life is good.