Thrice Three- The End of the Beginning

Thrice Three: The End of the Beginning

Southern California has two seasons.  One could be called Dry Heat.  It runs from late March to the end of October.  The other could be called Weather, as in, this is the time when California throws meteorological curve balls.  Some years it rains, some it doesn’t.  This year it has.  Then it froze.  Tonight will be in the twenties here.  Today I donned two layers of pants, four layers on top and kept a glove on my left hand as I painted.  Temp didn’t crack 50.  Coldest day of painting in my life. 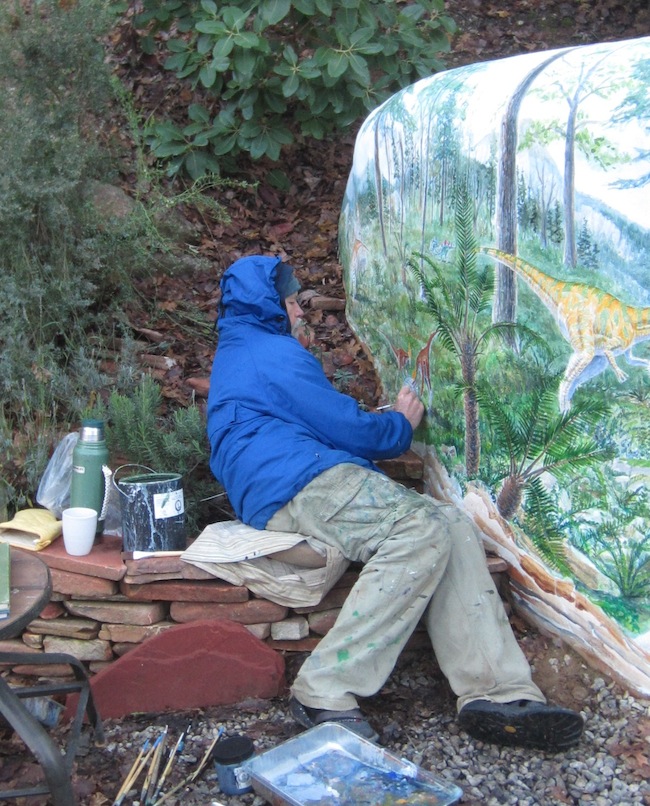 I rolled the dice on the timing of this project and got my share of snake-eyes. Days of pouring rain and watching hours work melt down the face of the walls.  Freezing weather drove me to retreat to the comfort of my little cabin every hour or so for some heat.  Wind driven rain was just a pain in the butt.  Dew forming on top of the low wall and dripping down its face for hours, streaking through any work I did too early.  I waged a constant battle against the tendency of rain to drain down the face of my working space, an aqueous eraser.

The size and complexity of the mural and weather delays have slowed me down.  Tomorrow I will wrap up this session on the Beast.  This is the end of the beginning.  Despite some delays I am very pleased with what has emerged and excited to come back here in a few months and really refine the thing.  In general, I want to add much more detail to the immediate foreground- to add ferns and cycads to the front and thus drive the horizon farther back.  I want to add some of the crazy birds of the Mesozoic like (I am not making this name up) Confuciusornis.  I need to add a few skulking mammals to the scene- biding their time, waiting for the asteroid to open the door.  I also want to throw in a few baby turtles, little survivors of a dangerous age.

But for now, here is the mural.  From right to left you travel from the late Triassic, 230 million years ago (MYA) to the end of the Cretaceous 65 MYA.

Here is the Triassic- on the right Eudimorphodon, an early pterosaur dives toward the waters of the warm sea. 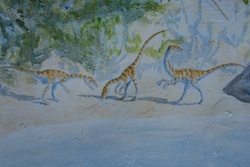 An early turtle emerges from the water.  Someone had to go first. Three Plateosaurus, the ancestors of all the giants to come, pass by, one pausing to fill its giant stomach. Protoavis, an almost bird or maybe a very early bird, flees a boulder.  Behind a monkey puzzle tree lurks Gojirasaurus. And beyond this little drama, crawling across the land, Proganochelys, the earliest known land turtle.  Spikes on the neck and tail, club at the tip of that tail. Off in the background a chase scene: Dilophosaurus tries to chase down Scutellosaurus The Jurassic, a time of giant trees and giant dinosaurs, a lush and tropical age

Brachiosuarus, one behind the redwoods, one out in the open.  75 tons, 75 feet long, tall, tall, tall. 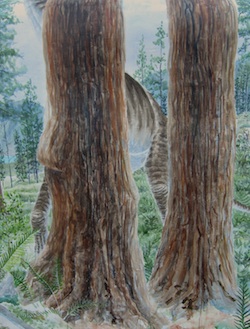 In the foreground, Heterodontosaurus, at a meter long one of the smallest dinosaurs is percehd on a mossy boulder. A pair of Archaeopteryx, birds with teeth, fly through the forest. And at the end of Jurassic, Stegosaurus romance: A pair of raptors investigate an inconvenient meal. A herd of Iguanodon head off down a long valley. The late Cretaceous, an age of volcanism, brought to an end by a 6km diameter hunk of space junk that crashed into what is now the Gulf of Mexico near the Yucatan peninsula.  End of the line for the most spectacular array of creatures our world has produced (so far). A herd of Alamosaurus drifting by as the sauropods fade out:

In the foreground, a lethal confrontation between a trio of raptors and a Lambeosaurus.  Leapin' lizards! Meanwhile, across the river, another drama.  A lurking tyrranosaur seems to have the drop on a herd of Styracosaurs that have drifted in from the left edge of the scene.  A quartet of Parasaurolophus appears from over a low hill to the right and the lead bull spies the giant predator and rears back to sound the alarm.  What happens next? In the background a volcano spews lava and ash and, slicing through the ash cloud, the hammer that nails the coffin shut on the age of dinosaurs: One creature sees: A lone "almost tortoise", sitting on a small bluff overlooking an insignificant river, cranes its neck to observe the approaching asteroid.  Along with the birds flitting by, this creature will survive the calamity.  Not so the large dinosaurs. The Mesozoic was the glorious age of the dinosaurs, the pterosaurs, the dawn of turtles and mammals, the time of the emergence of birds from their theropod roots.  What fun I've had hanging out in this chunk of the past for the last five weeks.

I think about the explosion of modern humans on the scene, our arrival not unlike that of that asteroid 65 MYA.  A bit more drawn out perhaps, but in the cosmic scheme of things there isn’t much difference between the few seconds it took for the asteroid to slice through the thin envelope of our atmosphere and the ten thousand years it has taken us to get where we are.  In geological time both are nearly instantaneous events.  I hope we humans learn the crucial lessons about how to persist on this beautiful and endlessly intriguing planet- how to curb our appetites, how to give as well as take, how to care for our home as well as to have it take care of us.

I think my friends the tortoises, survivors of a fifth of a billion years here, can teach us some of what we need to know, how to avoid the fate of the asteroid (remember that although it was a destroyer, it too was destroyed on impact).  To learn these lessons we will need to slow way down, to watch and listen carefully, to get our hands and knees a bit dirty, to pay attention.

I want my paintings to help people slow down, to reward careful viewing, to gradually reveal treasures hidden in plain sight.  The world I walk reveals itself to me in this way, glimpse by glimpse.  The more I watch, the quieter I get, the more I see and hear.  The closer I get to the ground the more I smell.  The slower I go the more I feel.  Stopping, at least occasionally, is best of all- ceasing all the doing to simply witness the glory in which we are bathed.

Thanks for following the mural progress so far.  Phase II will be in the season of Dry Heat.  Take care.