I was trailing 29 on a huge loop through his home range. Three days into the assignment I had seen the life of an alpha male tortoise at the height of the mating season- a search for sex made with the expectation of combat. In the search for love male tortoises follow a connect-the-dots path between the known dens of females and fight males they encounter. “My” tortoise was approaching the usual burrow of #58, a small female very popular with the males in the area. My interest was heightened considerably by the fact that another male, #55, was already paying court to her. Our work assessing the status of the males on the plot showed that 55 was lower ranking, that is, he lost fights to tortoises at 29's level. My coworker Kemp had told me that he had had a radio signal from 55 in 58's neighborhood. I had confirmed it with a frequency check of my own.

Thus I was on alert as 29 led me down the wash toward the female's burrow. A tortoise on a mission, he marched along, knowing exactly where he was going. I had a ringside seat from a low ridge next to the wash. Fifty meters from the wash-side home of the female I spied 55, as yet unaware of the approach of the more dominant male. Moments later he jerked his head up, listening intently, tensed for action. 29 steamed on and when he closed to within ten meters, the two males caught sight of each other. Neither hesitated an instant- 29 charged and 55, without a shred of concern for appearances, fled down the wash. A race was on.

There is something delightfully ridiculous about the sight of an animal so ill-equipped for speed doing its best to cover ground (perhaps cheetahs would have the same feeling about our Olympic sprinters). The guys raced in deadly earnest. 29 chewed up the distance, closing on his adversary. 55 hazarded a glance back, put on a burst and skidded into the burrow. Safe!

Fairly snorting as he arrived, 29 realized that 55 was burrow blocking, denying access merely by filling space at the mouth of the coversite. A frenzy of head bobbing and ramming of his rival failed utterly. Stymied but with no other options, the larger and stronger tortoise continued his impotent display of masculinity. Peeking out from between his forelegs, safely ensconced, 55 seemed relaxed. Stalemate.

Welcome to the world of tortoise lust. Here in the heat of the year, August and September, male tortoises experience a testosterone peak. In fact, desert tortoises have the highest levels of the hormone of any animal so far tested. Testes replete with ripe spermatozoa they become sex machines- ceaselessly patrolling the land, fighting and screwing. Accompanied by some notetaking mammalian voyeurs the tortoises of the Control plot followed an ancient rhythm. 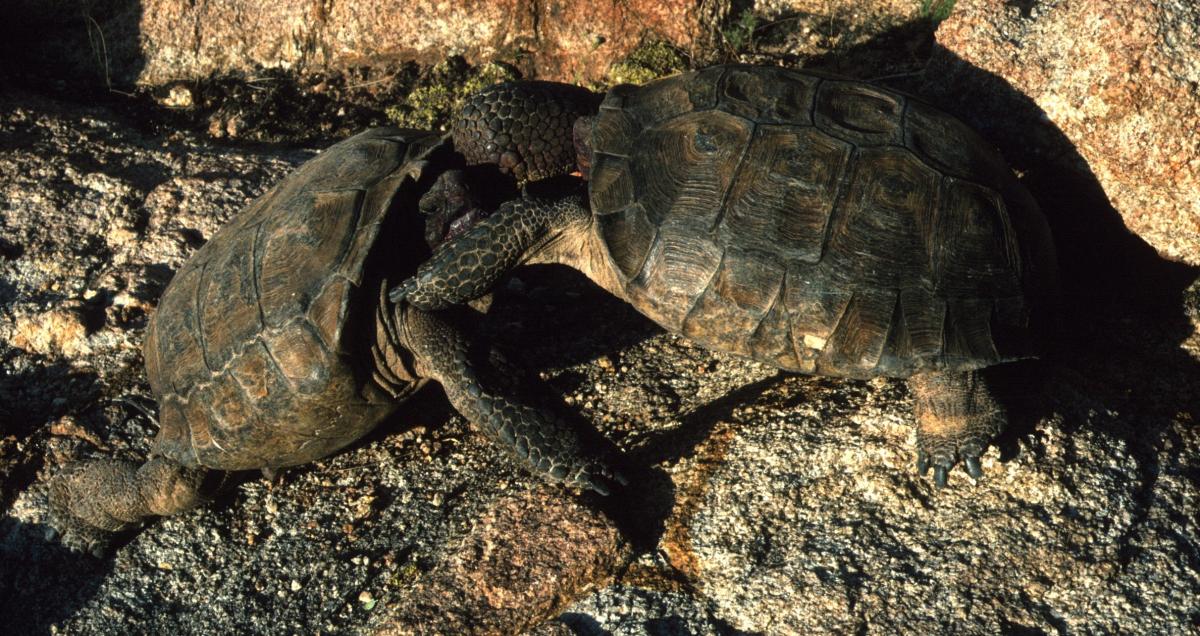 Our team was seeing deep into an aspect of desert tortoise biology that had been only poorly studied to that point. Not to get too Freudian about this interpretation but the fact is that herpetology was a bastion of male science until just about the time Dr. Kristin Berry, the woman directing the work, got into the game in the 1960s. Men had done the field work, men had written the text books and these men had presented reptilian sex as a matter of rape- the strongest males vanquish their foes and overpower the females of their choice. In the next few days this simplistic picture was in for rough sledding. Observation would trump text. Science would march on.

Over several seasons at Control we had witnessed a dizzying array of fights between males. With that many testosterone-crazed animals driven to visit as many of the fair sex as possible this was inevitable. Charged with recording every move made by our subjects we took extensive blow-by-blow notes on these battles and they never ended in draws. We determined who were the studs, who the middling mass and who the losers. Greek letters denoted their status as fighters. 29 was an alpha, large, strong and aggressive. 55 was a beta. He might win some of his bouts but was in no shape to challenge 29, hence his sensible, if undignified, retreat from the field of honor.

However, an alpha out in the sun is no match for a burrow-blocking beta. Work as he would, head bob and ram, fling soil and carry on, 29 was powerless. Only if 55 emerged from the burrow would there be a fight and that was not too likely. The subordinate male was tucked into the cat bird seat, 58’s burrow.

And what of the lady? The radio signal told me she was off somewhere close by, on a slope off to the east. The mid-morning sun beat down on us, 29 and me. Most tortoises retreat underground by time of day this time of year. No surprise then when 58 sauntered on to the scene, heading for her burrow and 55. OK, is she going to get raped now? Will 29 overpower her and forcibly inseminate her, thus insuring the continuance of his blood lines? All my training prepared me for this result. I had never observed a situation like this so I did my job- took careful notes.

29 is headbobbing 55 at the mouth of the burrow when 58 strolls up. She is tiny, half his weight at most but walks calmly up, acting nothing like a potential rape victim. Alpha-boy finally notices her as she pauses a meter behind him. He is Sir Walter Raleigh to her Queen Elizabeth. He backs up with head low. Parking himself a meter west of the burrow he allows the fair lady free access to the burrow that contains his rival. None of the vigorous head bobbing and ramming that precedes mating. Without acknowledging him in the least the little female enteres the spacious burrow. 55 in turn backs away from the burrow mouth. After a few minutes of shuffling in the depth of the tunnel the beta returns to his station to tortment 29 further- so close, so unreachable and now cohabiting with a desirable potential mate.

Assigned to follow 29 dawn to dusk, for the next two days I sat ten meters from the burrow perched on a slab of rock with a wide umbrella propped up to protect my Irish skin from Mojave August sunbolts. I watched 29 head bob in frustration as the mornings toasted up with his rival just out of reach, watched him retreat to the shade when, testosterone or no testosterone, it got just too bloody hot, watched him return to duty when midday fires subsided and, after a few more fruitless hours daring 55 to come out and act like a man, I watched him park under a shrub for the night. It was fascinating futility.

After two torrid days he'd had enough. 58 wasn’t the last female tortoise in the neighborhood and the longer he frittered away his days challenging the damn unreachable beta the fewer days he had to spread his genes around elsewhere. So early on day three 29 headed off west with a biologist, your humble narrator, in tow.

Epilog: Kemp took over observation at 58’s burrow as I left. Two hours after 29 and I headed down wash, Kemp reported, 55 and 58 were copulating in the morning sun. Beta, this time, beat out Alpha, who strangley aquiesced in the arrangement. Sadie Hawkins lives!